ARIA is a program developed by Deborah W. Moncrief, Ph.D., CCC-A, Assistant Professor at the University of Memphis. ARIA incorporates dichotic listening therapy to treat amblyaudia, a condition where a child develops a dominant ear that suppresses sound information coming from the other side which creates a “lazy ear.” 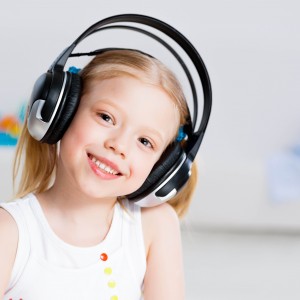 Amblyaudia is a developmental hearing disorder related to brain organization and function where one side of the brain suppresses auditory input to the opposite side. Amblyaudia is thought to be genetically determined and worsened by conditions throughout early development. Individuals with amblyaudia have normal hearing sensitivity, but abnormal auditory input during the first two years of life often caused by frequent ear infections and persistent middle ear fluid in one ear, degrades the quality of the sound reaching the auditory regions of the brain.  This creates a “lazy ear.” where the child’s dominant ear suppresses the activity in the non-dominant auditory pathway when the two ears are listening together.  The cortical restructuring believed to occur results in unwanted distortion due to the weaker pathway not synchronizing the speech signal appropriately.

The presence of amblyaudia represents an auditory-specific processing disorder that interferes with normal binaural listening. Individuals with amblyaudia have difficulty hearing in noisy environments like restaurants or classrooms and have difficulty quickly and accurately recognizing speech.  Often low-level background noises that most people do not notice or can easily ignore can be very distracting for individuals with amblyaudia.  This can contribute to weaknesses in language and problems paying attention to auditory information, which can affect academic achievement.

Amblyaudia can usually be treated with ARIA in four 1-hour sessions.

Following ARIA treatment children have better access to auditory signals, which will help them hear better, so they will have improved access to the curriculum at school. If a child has amblyaudia, this should be treated first in order to make listening easier and maximize benefit from other types of therapy (i.e. dyslexia, speech/language therapy, or tutoring) that the child may also be receiving.

Adults can also have amblyaudia and benefit from treatment.  Often adults with amblyaudia tend to be bothered by soft environmental sounds that other people do not seem to notice.  Hearing tests are usually normal, yet they have difficulty hearing in background noise.   It is not too late to get help because adults still retain some ability to rewire sound-processing centers.  A lazy ear can be retrained and typically corrected fairly quickly, significantly improving hearing in background noise.