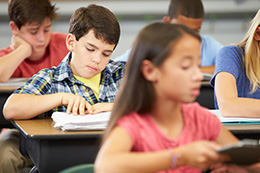 It is quite common for children with APD to appear to have and attention deficit and they are at risk of being misdiagnosed as having “ADD” (attention deficit disorder) or “ADHD” (attention deficit hyperactivity disorder). APD can also look like a behavior problem and lead to problems with anxiety. When there is a breakdown in the processing of what is heard in the brain it can make it hard to distinguish small sound differences within words.  This can affect the child’s ability to learn to read and spell..  However, the treatment for an auditory processing disorder is different that the treatment for dyslexia.

It is essential for a child to have the right type of intervention in order to address the underlying cause of the child’s listening and learning problems.  While APD awareness has increased over the last few years, there are still many healthcare providers and educators who have never heard of APD or may not have a clear understanding of what it is.  Many people do not realize that just because a child passes a basic hearing test, it does not mean that a  listening problem has been ruled out. Any child who experiences difficulties attending to speech, understanding speech, remembering what has been heard, and/or tolerating noise may benefit from auditory processing testing.